Out of the Shadows: A Spitfire story

Working with the collection at Wessex Film & Sound Archive (WFSA) is a joy. I spend my days watching archive film across a wide spectrum of topics. As a Hampshire resident, I have always had a vain hope of spotting a relative on film. Sadly, in reality, unless you have a clear idea that a relative you know features in a film that we hold there is little chance that you will spot them…

That said, almost all of the films within the collection feature people – we are a very human archive capturing people at work, rest and play. We have over 38,000 items and people are at the very centre of these. Whilst we hold some information about the faces who grace the screens in most cases, these faces remain nameless individuals going about their daily lives. Just imagine the number of people whose image we hold for posterity. 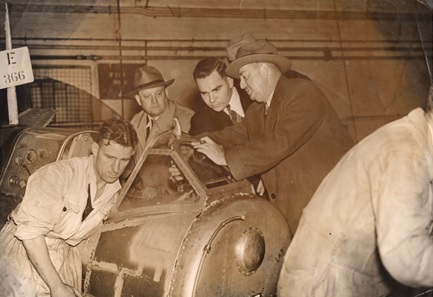 Len Gooch (third from the left) at the Works with visiting Americans.Image credit: author’s own.

While researching content for our February 2018 event ‘Moving through Time’, I stumbled upon a clip from a 1976 documentary: ‘SPITFIRE’ made by the BBC; a talking heads documentary, that aimed to tell the story of the Spitfire. I skimmed the film and chose a clip of the prototype’s maiden flight.  I’d managed to identify this clip with the help of my dad, who was able to tell me with some certainty the date of the flight (5th March 1936). In casual conversation we then started talking about Uncle Len – Leonard George Gooch, my dad’s uncle – my great uncle (‘Georgie’ as he has been affectionately labelled on some of our family photographs), who’d worked on the production of the Supermarine Spitfire and who featured in the documentary, along with the likes of Sir Douglas Bader.

Here’s the extract that features my uncle, which we are able to share online with thanks to BBC South.

Through coincidence and sheer luck we heard a news story on BBC South Today about a play that was to premiere at the opening of the new Nuffield Theatre in Southampton. Entitled ‘Shadow Factory’, the play, written by Howard Brenton focused on the story of the Spitfire production, dispersal scheme and tells the story from the point of view of a handful of people at the centre of this key point in time. One of the main characters is Len Gooch.

Leonard George Gooch was born 7 February 1912 in Bishopstoke, the youngest of four surviving children to his parents George and Elizabeth. His father, George, had worked as a ‘Railway Bricksman’ at Eastleigh. As far as it is known, Len was schooled locally and went on to an apprenticeship on the railways; as part of which he attended University College Southampton. Starting in 1931 he went on to complete a three year ‘Ordinary Grade’ National Certificate in Mechanical Engineering. The second year of which included a City and Guilds unit in ‘Railway Carriage and Wagon Building’. This was awarded in 1932, when he also achieved: ‘First prize £2. 10s (Merchant Taylor’s Company) and Institute’s Bronze Medal’.  The three year course included units including: practical mathematics, engineering drawing, engineering science and applied mechanics. He then went on to study the ‘Higher Grade’ National Certificate in Mechanical Engineering, a two year course in which he obtained distinctions in ‘Strength of materials and structures’ and ‘Heat engineering’ which was awarded 27 September 1935. 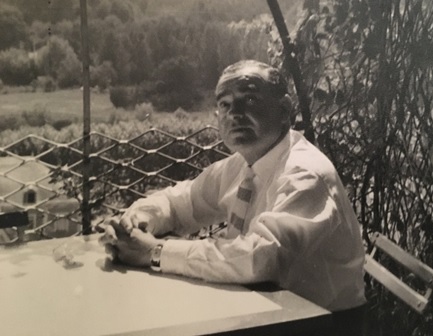 By 1937 he had met and married Leontine Viney-Oxford ; the following year the couple had a son, Michael, who sadly passed away at only a day old. The couple’s first home together was 65 Swift Gardens, Woolston, which was conveniently located for Len’s work at Supermarine. The couple were living there together when war broke out in September 1939 but moved sometime in the year following to 59 Morris Road in the Polygon area of town.[i]  In the 1939 register, which served the purpose of logging all civilians at the outbreak of war, Len’s profession was listed as ‘Mechanical Engineer and draughtsman’.  Len must have worked hard to progress in his chosen career to be in a position to take on a more senior role during the War.

What was the Spitfire dispersal scheme and why was it necessary?

Designed by R J Mitchell in the 1930s, Supermarine had been initially awarded a contract to build 310 Spitfires and plans were put in hand to go into mass production at Castle Bromwich in the Midlands. However, due to a variety of reasons this was slow to materialise and early production was restricted to the Southampton works at Woolston. The onset of war highlighted the need for increased production and to also disperse production in order to maintain some continuity in the event that the Southampton facilities were attacked. As a result some limited dispersal had begun to take place before the autumn of 1940, under the then Works Manager, Mr H.B Pratt.

In September 1940 the Luftwaffe began targeting the Southampton area – hitting Eastleigh on 11th September, Woolston on 15th September, and Itchen on 24th September and then again Woolston and Itchen on 26th September. There were massive casualties and the factories and surrounding areas took a devastating blow, both in personnel and infrastructure. It was at this stage that Len was given the task of organising the complete dispersal of Supermarine production and the management and coordination of the resulting areas; a daunting task. Setting up headquarters in requisitioned rooms at the Polygon Hotel (near to his new home in Morris Road) under orders from Lord Beaverbrook, Len, now Supermarine Works manager, and his colleagues orchestrated the dispersal of the manufacturing process. This ensured that vital Spitfire production was maintained during the Battle of Britain, an event that ultimately helped to change the course of the war.

His task was to ‘disperse’ the production of this vital fighter plane across the south of England to reduce the risk of aircraft production being curtailed by further enemy bombing.

‘Dispersal sites’ (or Shadow Factories) as they were known were chosen for suitability according to how readily they could be adapted to manufacture the components of the aircraft. Garages, laundries, bus stations – locations equipped with space and machinery were very rapidly requisitioned and put to work. This presented many challenges given that the people employed and premises had never been used for the complex process of building a state of the art aircraft.

As well as a number of locations in Southampton itself – dispersal works were set up in Chandlers Ford, Hursley, Newbury, Reading, Salisbury, Trowbridge and Winchester. You can read much more detail on the Supermariners website.

In addition to the BBC’s SPITFIRE! programme, WFSA hold a number of other relevant items, including films from Elliot’s of Newbury a manufacturing firm and, one of the dispersal sites. The film ‘AV338/1 Spitfire components’ was filmed by Elliot’s and is an interesting and insightful glimpse inside the manufacturing process. The film has intertitles telling the viewer which components are which and there also shots inside the Materials Purchasing Office. At the time of writing we are waiting for permission to share this film online, but hope to do so in the near future with a view to identifying some of the workers seen on screen.

Len continued with the Supermarine after the war, and our family archives contain many photographs from these years. In 1963 the Supermarine element of Vickers Aviation was closed, and by 1965 the brand name Vickers was abandoned by the BAC (British Aircraft Cooperation) and then later in 1977 was nationalised to become part of BAE, later BAE Systems.

What have I learned? It’s not impossible to spot your relatives on film. You may have to consult a wide range of sources to make sense of the fragments of information but if you have snippets to go on and are willing to think flexibility about how film could fit into your story you could well spot someone you know.

Here, my focus was the Spitfire.

What will yours be?

Further, more detailed information is available on the Supermariners website. The Out of the Shadows project is ongoing, and oral history interviews from the project will be deposited with WFSA in due course.

On Saturday 15th September 2018 the Memorials to RJ Mitchell and the Supermarine Workers in Woolston will be rededicated to mark the importance of their creation.

View all posts by hampshirearchivesandlocalstudies

One thought on “Out of the Shadows: A Spitfire story”